Vintage me – I cut my hippie braid off last night 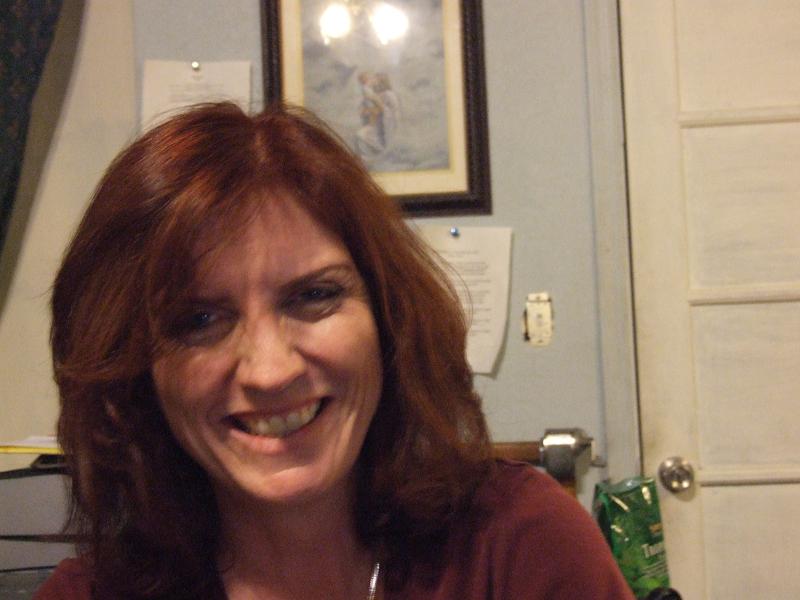 I’ve been blogging for years, and it’s time to let the old Starr speak to you in ways that the current Starr can’t…from the perspective of someone who is living the shit I used to put myself through!

And so, with no further ado…I cut my hippie braid off last night

It was around 1 A.M., one of the beads had poked me, or maybe I pulled it when I rolled over. But something woke me up and this voice inside my head said “it’s time to let it go”.

I got up and turned on the bathroom light, my cat kind of opened one eye and looked at me, and then put her head back down. I rummaged through the basket on my bathroom counter, briefly thinking (and rejecting the idea) that perhaps I should have my glasses on before taking scissors to my hair. I found the scissors, made the cut and thought ”there…I’m free”.  I went back to bed and slept deeply.

I know, one would wonder why this is such a significant thing. Up until the moment in which I cut it off, I hadn’t realized that my hippie braid had any significance…but it did.

It took me a whole day to put it on. I actually didn’t know how to do it. I just figured that, like most things, I would figure it out along the way. It turned out pretty nicely! There were a few imperfections, but overall, I was impressed with my handiwork. Like so many things in my life, I knew to do it, but I wasn’t quite sure why.

Well…scratch that last bit. I knew why; it was because of a man.

I loved him. He didn’t love me…but he wanted to conquer me.  I knew that if I were to stay in this lopsided love affair, my heart would shatter completely. So…as much as I had promised him that I would wait for him to love me, as much as I declared my love and my unending patience, I chose me instead. Even as I write this, an echo of the pain of an unbalanced love affair seeps into my heart and tears are waiting to be released.

But there is just too much to say…and after months and months of wanting to write but being unable to…the tears will have to wait. I have to get this down.

So…the affair ended. And one day, when there were a thousand other things for me to do, I sat in my bedroom, took a small section of hair and tied knots of different colored threads, weaving in beads and old earrings into it. Maybe it was a distraction from the pain, or maybe it was an act of defiance.

As much as I told myself that it was going to be different this time, that I was going to stand in my truth and be me…I had started down the road of obsession and bending and contorting in order to be loved. I began to lose myself once again…and he began to withdraw. Hell…he didn’t even notice that I had broken up with him!  I had sent him an email because he was unreachable by phone and I hadn’t spoken with him for a week. I figured he decided that I wanted too much and he was done.  One day, out of the blue, he called me. He didn’t call me to talk. He called me because he wanted me to refer my friends to his business. He had received, but never read the email.

So…I put my heartache into the threads and the knots. I chose bright colors and shiny bits and stars and I claimed my independence.

And then I set to work to figure out how and why this had happened…again.

What I really needed was a final lesson…a graduate course in heartbreak so that I could complete my Master’s Degree in manipulation. Although, truth be told, I’m not sure if the manipulation was his…or mine, because I really did a number on myself.

Even still…as I sit here and consider what to write…my heart aches bit more. I’m allowing the pain the opportunity to come out to breathe, because the message and the lesson need to be communicated. They can only come from this place. This place is sacred and it is to be honored. The story must be told.

The story starts with a little girl born into a family of broken people. They were wonderful people…but they were broken.

My family had a legacy of brokenness, of heartache and pain and unworthiness, of chaos and dysfunction. I learned to love dysfunction. I learned that the only way to love was to give and give and give…and even when I was treated badly, I needed to love anyway. I was told that the people who dished out emotional pain just needed to be loved and that perhaps, one day, that love would heal them. Truth be told, it never did.

It’s a wonderful sentiment, to love broken people in the hopes that love would heal them. But, for me, that sentiment got tangled up in my need to be loved, in my own brokenness. It became a vicious cycle. It became an unconscious statement of “if I just love you more, perhaps in my vulnerability and my openness you will see that it’s ok for you to love me in return. You will see my value, because, really, that’s what I need; I need you to love me and show me my value”

I was taught to set aside my need to be loved and to place the needs of others before mine. I was taught that my heartache didn’t really matter…it only mattered that I helped others and gave my all. I was taught that I needed to be nice; that I needed to be sweet and that I should ignore my own pain. The pain of the broken people around me was greater. I was one of the lucky ones; I had more than they had, my problems and anxieties were small when compared to theirs.

This final lesson gave me the opportunity to see all of that. It gave me the chance to really look at the pattern of a lifetime that had set me up for failure in each and every relationship I had ever been in.

I guess the hippie braid said “I’m different”, and perhaps it served as a reminder that my life is my own, that I make my own choices. I chose to put my uniqueness out there for all to see.

The braid seemed cool, but mostly it was uncomfortable, but then…I was uncomfortable. I was excavating my life and looking at things from my past that were uncomfortable to observe. It was a strange feeling to not be in a relationship or chasing after one. It was odd to sit with my Self, without judgment, and without…doing anything. It felt strange to sit with my friends and not talk about the man in my life. I found it odd that I had zero interest in sex, when that had been all that had been on my mind in the months and…well…years…prior. I had meltdowns. I had a business to build and I had to step outside of my comfort zone to build it. I found myself in situations in which I had to be assertive and tell people the truth, even if I thought that they didn’t want to hear it.

And I had to tell the truth about me.

And there were moments when the truth shifted; when something that was true for me one day…turned out not to be important the next day. And in those moments, I had to be honest too and I had to refuse to be afraid of what others would think. I had to just say…”yesterday this was important, today – not so much. Sorry, I changed my mind”.

And even through all of that, it felt like I had withdrawn into myself. I had times when I thought…”man…for all the energy I put out there to entertain and impress people…deep down I’m really boring”.

“Boring” was a new thing for me. I come from a family of “entertainers”. I’ve always said that my family won’t talk about the elephant in the room, but we’ll put lipstick on that bitch and make it dance. We put the fun in dysfunctional…we’re funny. We’re story tellers…it’s how we roll. So, when people are around, we are “on”. To allow myself to not be the brightest light in the room, or the center of attention was a new experience for me.

But I also discovered that even when I’m not “on”…I’m still noticed. I started to learn more about me and my energy and how others perceive me and how they accept me. I learned to accept me too.

The big test came over Labor Day weekend. I spent 4 days in a cabin with women who I knew from a spirituality group that I was in. We had spoken over the phone via conference call for over a year and had built great friendships, but had never met in person before. I was the organizer of the weekend and spent a lot of time working to accommodate the different needs of all of my guests. In the midst of being with women that I respected and admired, I tried to remember that I was worthy of respect as well.

At times, through the weekend, we discovered that we were polar opposites on a variety of topics. I managed to be calm on the outside, but my old fears came back. My need to be loved and accepted came back, my desire to bend and twist in order to be “liked” came back. Judgment sat with me for a while.  I allowed such things to exist so that I could observe them, but I constantly reminded myself that they were old patterns which no longer served me. I reminded myself that these women loved me unconditionally and would accept me no matter what. I had to allow myself the courage to accept that unconditional love. I allowed myself to be vulnerable, to be giving and to be truthful.

One morning, one of these dear friends commented to me that one of the many things she loved about me was that I was comfortable in my own skin. She gave me examples of how I showed it. I didn’t feel the gift of her words then, but I do now.

In the weeks since then, that comfort has grown.

And since that weekend, the interest in men and sex and all that goes with it has crept back in. Like everything else these days, I’ve observed it, I’ve wondered about it…and I’ve told the truth where I’ve needed to. I’ve balanced it with the knowledge that I am surrounded by people who love me unconditionally. I’ve discovered my love of Freedom: Freedom to be me…Freedom to make a choice…and Freedom to make a completely opposite choice the next day, Freedom to chart my own course, Freedom to indulge, Freedom to pull back…Freedom to be comfortable in my own skin…always.

It seems as though the hippie braid was a way for me to tell the world that I am different. It was a way for me to project to others that I have the confidence to be different and they just have to deal with it but that doesn’t really matter anymore. What matters now are the threads that I have woven on the inside…with the shiny bits and the knots, the imperfections and the beauty. It is the handiwork of a woman who lives her truth and loves herself.  I no longer need to be uncomfortable to be reminded of that.

So…this morning at 1 A.M.…when that damn hippie braid woke me up. I cut it off.