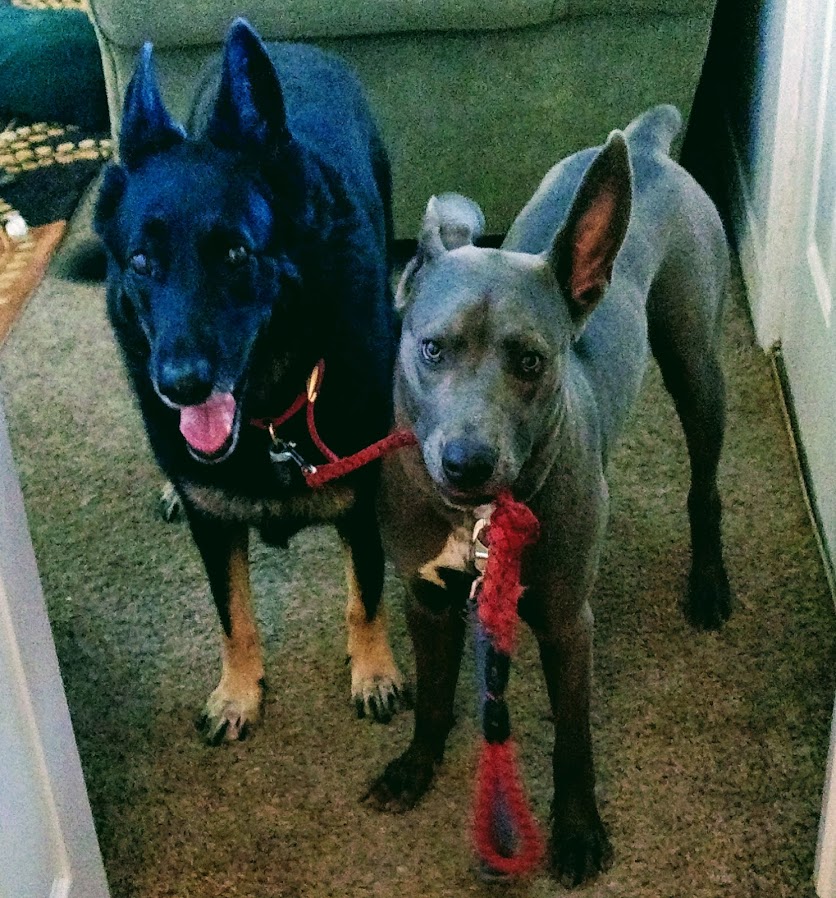 No, it’s not like that, we’re not meth dealers or anything…

We just have dogs…

Yesterday, an officer from Kingman Police Department’s, neighborhood services division showed up on our doorstep. He told Scott that a neighbor had complained about “excessive feces” in the back yard and garage. He said we needed to clean it up and he would be back in a couple of weeks to check on it.

At first we were puzzled…our garage is only ever open for us to get our car thru.

Well, and then I was embarrassed, it’s my job to clean up after the dogs.

After a few minutes, I said to Scott “well, there you have a prime example of manifesting by default”

Because for the last week, I’d been walking out in the back yard and wishing I could get it cleaned up. And I kinda wanted to create a nice peaceful haven on the back patio. And I really wished someone would clean up after the dogs…

BOOM the Universe handed me the means to get all that done in the form of one very kindly member of Kingman’s finest…and a neighbor with a problem.  I didn’t get it really. We’re quiet people. We don’t bother anybody. And yes, our dogs bark and poop to be sure…but what the actual fuck? I had a feeling that I knew who the neighbor was. He seemed to like us at first, but as time has gone on, he’s found more and more reasons not to like us.

It came to me that perhaps I was nose blind to the issue, and certainly blind to other issues that needed to be addressed, like the fact that a having a house surrounded by shit is not a good way to manifest an empire. I’ll be honest though, when I asked the Universe the other day to show me what needed to be done in order to manifest the life I desire, cleaning up dog shit was not anywhere near what I had in mind. But it had to be done.

It took me about an hour to clean it up. No big.

This morning, I decided to go one better. The weeds around the house have been growing. So, I headed outside to tackle some of that.

As I was pulling the weeds between houses, my mind wandered. I kept wondering what was up with the neighbor. I felt bad that anyone would have a moment of anger over something that I just wasn’t paying attention to. I thought about how, the last time he came over and SCREAMED at me telling me to shut my dog up, I was seriously unnerved and upset. But I went over a few days later and gave him my phone number. I told him that he should never get that angry again, if he has a problem, here’s my phone number, just call.

Maybe he lost the number?

Or maybe it wasn’t him.

I thought that perhaps I should do something nice for this neighbor. That used to be the MO of the people pleaser that I was. However, I nixed that quickly. I don’t play that game anymore. I’m not going to bend over backwards to get someone to like me. So no I am not pulling his weeds, not baking him cookies, not spending any more effort than needed to try and win the approval of someone who should be apologizing to me for being rude.

I kept pulling weeds and cleaning.  I’d work on a patch here and a patch there, I’d rake and put things in the trash. I’d stop, I’d look, I’d pull…

And I kept thinking.

For a second, I considered that, unlike me, most people might take revenge or have ill feelings toward the guy next door. That would be a big waste of my energy and I don’t have time for that.

The way I look at it, I had a blind spot and someone let me know about it.

I considered how that person must have felt, and how angry they must have been, how maybe they had just had enough. Although the dog shit may have been the catalyst, their actions really had nothing to do with me personally; that they were, in fact, in pain.  I’m probably just one person on a long list of people that this person has a grievance with. I felt compassion for them.

I stood in the middle of the front yard and looked at all of the houses on our street. The street is closed off on one end, so there are just the 10 houses on a very quiet block. I don’t know anyone’s name…there’s just “the people across the street with all the cars in the yard…who are probably mechanics” and “the old guy with the little dog who goes for a walk every day” and “the guy with the black and white American flag on his truck” and “the asshole neighbor who yelled at me” and “the lady next door who never comes out”….and other than that, I have no idea who they are.

I thought about maybe sending a nice letter to each of them telling them who I am and thanking whoever it was that called the pd on us, and letting them know that it’s really ok to knock on my door and tell me stuff. But let’s face it…do any of us actually open our doors to strangers anymore? Do I really want to take on being Miss Mary Sunshine in the neighborhood? Wouldn’t that be an extraordinary action to take for a temporary problem that I’d fixed already?

Instead, I looked at each house and I sent blessings to the occupants. I sent blessings to our “agent of the Universe” who called and kicked me in the butt to clean up the yard. I blessed the asshole neighbor who is fighting a battle with a wife with MS and a bad back…and many other battles that I can only imagine.  I sent a prayer for his happiness.

Sometimes there is no action to take, but to find peace and to send love to those who you think you should be mad at; to simply accept the course correction for the blessing that it is and move forward.

Vowing to come back to the weeds in a day or two, I picked up the shovel and the rake and the broom, closed up the garage, and came in the house.

The dogs greeted me cheerfully and scratched at the door to go in the back yard…and go poop.