Caught in My Own Trap 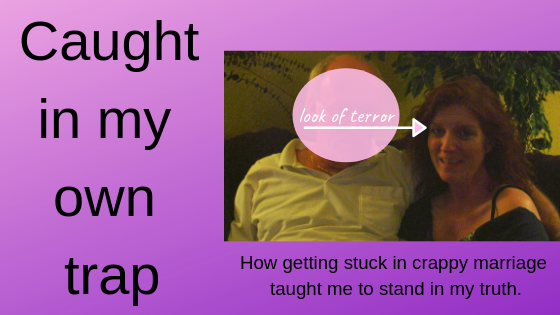 Let’s face it, from an early age, we’re taught to lie.

It’s not meant to be that way, but as kids, we were told to be polite, to not hurt other people’s feelings, to agree. We’ve been trained to lie from the moment our mother’s teach us the rhyme “sugar and spice and everything nice”. We were raised that way. We were taught to accommodate, to consider that others’ feelings are much more important than ours. So much so that we often have a continual tape running in our heads telling us what is proper behavior, what is expected of us, how we should look, act, think.

I remember the days when I couldn’t stand in my truth.

Standing in your truth means that you unapologetically state what is true for you or about you…no matter what.

I didn’t know how to do this…not even a little bit.

I honestly didn’t know what my truth was. Even worse was that I was an incredible people-pleaser and a chameleon. I would be one way with my party friends, another way with family, still another way with my husband yet another way with a particular friend who was different. Whatever people wanted to see…that was what I showed them. I couldn’t say words out loud that may have caused disagreement, I couldn’t actually say no. I gossiped in order to feel important and “in the know”.

And I considered myself an honest person.

It’s hard for me to admit that.  I have always valued honesty above all else, and yet, for years because I couldn’t actually tell the truth, much less admit it to myself, people were often angry with me for lying.

Because…well…I lied every time I denied myself.

I lied every time I agreed to something I didn’t want to do.

I lied every time I said yes when I wanted to say no.

I lied every time I tried to be whatever I thought people wanted me to be.

I lied when I didn’t speak up.

The fact is, I was a liar and I didn’t even realize it.

So many instances from my life are jumping into my mind at the moment. Like the night I pushed my brother and screamed at him because the rage inside of me was so huge. The time I told a friend that I didn’t like the painting in her room and she still liked me anyway. And of course all the times I got caught in my own trap because I just couldn’t say what was true for me. One of those traps was a 5 year marriage.

Actually, I think it was that marriage that did the trick. I just shake my head when I consider how much I tried to fit into the box of what I thought that man wanted me to be. I swear I think I lied to him every day from the minute I said I’d go out with him until I said “We need to get a divorce”. Ugh.

I never intended to be a liar. I just wanted to be loved, I wanted to make other people happy, I wanted people to like me…and well…in some ways, rescue me. That was just a deadly fucking combination for me. It was a soul sucking, dangerous…stupid combination.

Getting trapped in that 5 year marriage woke me up. Somewhere in the middle of it, I found that I had completely lost my voice. I decided that I would figure out who I was and start living from that place. I slowly began telling the truth to my friends about who I was and what I liked. The great thing was…they still loved me and it gave me confidence to tell even greater truths. Telling my ex that I wanted out was one of those greater truths.

It turns out, he wanted out too and we had the fastest divorce on record. I told him in November, and our divorce was final the following April (a mere 5 months later).

There was still some lying and people pleasing for a bit after that…but eventually,  I just really got tired of the drama. I decided to tell the truth every single day…even when it was uncomfortable. It often turned out the only really uncomfortable part was in my head. I soon discovered that I could tell other people the truth…my truth…and they could handle it.

And the best part…nobody died. I didn’t…they didn’t. The world survived me telling the truth.

It seems that the more truths I told, the more I wanted to tell! I had found my voice again.

The big test came when I had to tell my mom and my family that I’m an intuitive and that I talk to Angels and Spirits. It was a choice I wrestled with for a long time, but finally it came down to this single thought that enabled me to say the words.

I knew very well that as soon as I told Mom, the whole family would know. I wasn’t really sure how that was going to go. True to form, however, Mom took it in stride and loved me anyway. There are family members who have chosen to reject me for my beliefs…but even that doesn’t hurt too much. I’ve let them know that I still love them and that they are welcome to ask me questions if they have any.

But the most liberating thing that came out of that bit was that I stood firm. I stood in my truth.

I didn’t bend or try to accommodate or even try to let them know that we share many beliefs in common. I didn’t justify. I just said ”this is who I am, it’s ok if you don’t agree. I still love you anyway. “

I wasn’t radical or argumentative. I decided that either they handle my truth or they don’t. How they deal with it is not my problem.

Having come from that place, integrity is everything for me now. It’s the sweet spot in my existence. It’s where I stand and it feels incredibly good.

But the fear that you have is based in this whole idea of not-enoughness, in the lies we were told as kids, in the sense that we’re not lovable if we don’t accommodate.

And that is the biggest lie of all. Don’t believe it for a second.