Alone in my head without adult supervision – Part 1 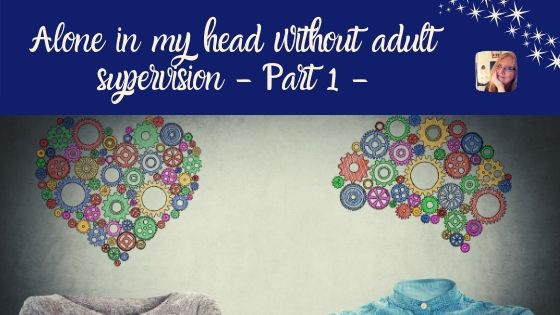 A “vintage me” post from back in the heady, heartbreaking days of my divorce. Written around 2005

I used the phrase “alone in my head without adult supervision” with Shaunna last night and she just cracked up. By the way, I’m sure it’s her fault that I’m up at 4:54 am. She just went to bed and I’m just getting up. I tried to stay up with her and made it until midnight which is two hours past my bedtime. Sometimes though, when I’ve had a couple of drinks, I don’t sleep very well, and last night was a “two cosmos” night.

Another milestone in my life occurred last night; my ex told me that he has a girlfriend.

It is the strangest thing. I can remember just a few short months ago thinking that it would kill me to know that there was someone else, but I’m really happy for him.

I think I’ve just figured out why I’m not falling to pieces; September 21 marked our 20th anniversary. At the time, I was making yet another failed attempt to try to get back together. It just wasn’t working; too much damage had been done.

I wrote him one last time and poured my heart out and talked about how I really had to walk away this time for my own sanity. I found the letter the other day as I was cleaning out my closet. I had circled one sentence: “And what scares me is that I’ll walk away and you’ll decide that perhaps you should take a look at (your pain) and you’ll open yourself up to someone else. And that will fucking kill me”

I remember reading back over the letter at the time I wrote it and that sentence just jumped out at me. It was a healing moment. I realized that I had been staying and hanging on in the hopes that my ex would look at his pain the way I wanted him to and heal the way I thought he should.

In discovering that key, I realized how much I wanted to be his rescuer, the martyr that loved him in spite of everything.

So back to last night. I kept waiting for the pain to creep in. I was closely monitoring my reactions to the news that there is a girlfriend. I know myself well enough to understand that I can sometimes mask pain automatically. I was watching for signs…I didn’t go cruising the dating sights, I didn’t call anyone and ask them out on a date, I didn’t engage in self-destructive behavior at all….except for the cosmos and a few cigarettes. This morning, I’m being very careful not to get caught up in what I “should” feel. I’m just feeling whatever comes along. And
so far, I’m ok with it.

Maybe one day in the future I’ll find the pain…but maybe not. Maybe the pain has been dealt with and neatly put away.

It seems that there is an actual adult in my head…and she has things firmly under control….for the moment.

She DID have things under control for the moment…but it took a lot more work! Need help with managing your emotions? Check out part 2!

Need help now? Contact me and let’s get you back to the real you!